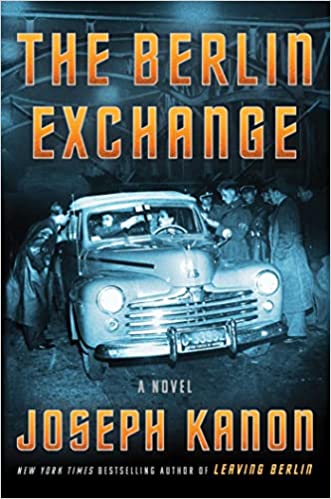 Berlin, 1963. An espionage thriller set at the height of the Cold War.  Martin Keller, an imprisoned American who has spied for the KGB,  is offered a spy swap to return to East Berlin.  Eager to reunite with his ex-wife and their young son, he leaps at this chance for freedom.  But has he just exchanged one prison for another?  Who has asked for him?  Who arranged the deal?  The KGB? And what do they want from him now, all these years later? Intriguing and atmospheric, with action rising to a dangerous climax, Kanon’s latest thriller confirms his standing as a “master of the genre”
– The Washington Post

“Thoroughly absorbing, a thoughtful and subtle evocation of a place and era.”

“A novel that gives paranoia a new name, Kanon’s latest in a brilliant collection may be his most tightly rendered. The suspense builds quietly, almost stealthily, before tightening its grip.

Another super sophisticated spy thriller from a ranking master.”

“Riveting…genuine suspense, including an exciting variation on the border-crossing theme, combine beautifully with moving psychological drama.”

“A tense spy thriller… Kanon balances a convincing portrayal of spycraft with fleshed-out characters, while vividly depicting the impact of secret lives on the loved ones of those engaged in espionage.”

“A master stylist of concise yet eloquent writing, Kanon recreates the corrupt atmosphere of East Berlin in 1963, to riveting effect…Kanon’s books are a gold mine for lovers of espionage…Fans of Alan Furst and John le Carré will include Kanon as the third member of a Cold War troika.”

“He hadn’t done it for her, the spying. But he wouldn’t have done it alone.”