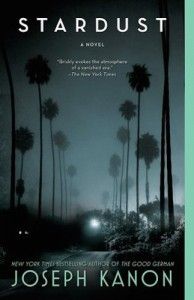 Hollywood, 1945. Ben Collier has just arrived from wartorn Europe to find that his brother, Daniel, has died in mysterious circumstances. Why would a man with a beautiful wife, a successful career in the movies, and a heroic past choose to kill himself?

Determined to uncover the truth, Ben enters the maze of the studio system and the uneasy world beneath the glossy shine of the movie business. For this is the moment when politics and the dream factories are beginning to collide as Communist witch hunts render the biggest stars and star makers vulnerable. Even here, where the devastation of Europe seems no more real than a painted movie set, the war casts long and dangerous shadows. When Ben learns troubling facts about his own family’s past, he is caught in the middle of a web of deception that shakes his moral foundation to its core.

Rich with atmosphere and period detail, Stardust flawlessly blends fact and fiction into a haunting thriller evoking both the glory days of the movies and the emergence of a dark strain of American political life. It brilliantly proves why Joseph Kanon has been hailed as the “heir apparent to Graham Greene” (The Boston Globe).

“A gripping performance and a canny updating of the classic Hollywood crime story.: — AARP

“Kanon operates with an intelligence that briskly evokes the atmosphere of a vanished era.” – NY Times

“Spectacular in every way…wonderfully imagined, wonderfully written, an urgent personal mystery set against the sweep of glamorous and sinister history. Joseph Kanon owns this corner of the literary landscape and it’s a joy to see him reassert his title with such emphatic authority.”
– Lee Child

“The new Joe Kanon is one of the best, Stardust is the perfect combination of intrigue and accurate history brought to life.”
– Alan Furst

“Stardust is sensational! No one writes period fiction with the same style and suspense – not to mention substance – as Joseph Kanon. A terrific read.”
– Scott Turow