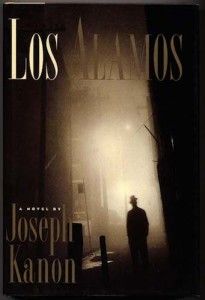 Spring 1945.  As work on the first atomic bomb nears completion on a remote mesa in New Mexico, Karl Bruner, a Manhattan Project security officer, is found murdered in nearby Santa Fe.  Is Bruner the victim of a violent sexual encounter, as the local police believe, or is his death a crime that threatens to jeopardize the secret of the Project itself?  This is the mainspring of Joseph Kanon’s Los Alamos, a supremely original and romantic new thriller that re-creates the most compelling real-life drama of this century.

“The suspense novel for all others to beat…[a] must-read.”—Denver Post

“This utterly compelling first novel by former publishing executive Kanon seamlessly interweaves historical fact with a superbly constructed plot  .. For readers who have tackled Richard Rhodes’ magisterial Making of the Atomic Bomb (1987), the ultimate nonfiction account of the scientific and political implications of the Manhattan Project, Kanon’s infinitely entertaining novel makes the perfect dessert course. It captures the historical moment with palpable ambience and unquestionable authenticity, and its combination of spy and love stories not only adds drama but also calls into bold relief the human ambiguities that are at the heart of our audacious but potentially Faustian dance with atomic energy. – Booklist

“a smashing debut … Kanon’s use of Oppenheimer, General Leslie Groves and some of the other real-life people in the book, is exemplary; he has created characters who are both true to their actual selves and three-dimensional actors in a convincing fiction. His villains are profoundly human and horribly plausible; the real life-and-death issues of that time and place are thoughtfully set forth; and the book is crammed with the kind of utterly believable details it would seem impossible for someone who was only a child in 1945 to have created. There is a tingling climax (yes, you do get to see the first bomb go off) and an ending full of the most poignant irony for anyone who remembers what happened later to Oppenheimer. This is a thinking person’s thriller that makes wonderful use of, but never cheapens, one of history’s more extraordinary moments.

” Read this book…it’s a love story inside a murder mystery inside perhaps the most significant story of the twentieth century: the making of the atomic bomb…A magnificent work of fiction…A stunning achievement.”