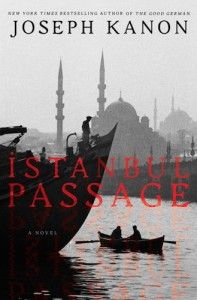 A neutral capital straddling Europe and Asia, Istanbul has spent the war as a magnet for refugees and spies. Even American businessman Leon Bauer has been drawn into this shadow world, doing undercover odd jobs and courier runs for the Allied war effort. Now as the espionage community begins to pack up and an apprehensive city prepares for the grim realities of post-war life, he is given one more assignment, a routine job that goes fatally wrong, plunging him into a tangle of intrigue and moral confusion.

Istanbul Passage offers access to the compromised milieu of a vivid metropolis in its first postwar winter, where everyone is trying to keep balance amid bad choices.”

“Kanon compounds the fraught postwar mood with a location to match…Istanbul Passage is enlivened by intelligent plotting and its vivid evocation of the city itself, a setting rich in centuries of intrigue.”

Library Journal (starred review)
“ISTANBUL PASSAGE is a first-rate espionage novel, filled with complexity and thrills, but its greatest success may be in this much more universal literary exploration: how an ordinary man is transformed by extraordinary circumstances.”

“With dialogue that can go off like gunfire and a streak of nostalgia that feels timeless, this book takes its place among espionage novels as an instant classic.”

“ISTANBUL PASSAGE bristles with authenticity. Joseph Kanon has a unique and admirable talent: he brilliantly marries suspense and historical fact, wrapping them around a core of pure human drama, while making it seem effortless. This isn’t just talent; it’s magic.”